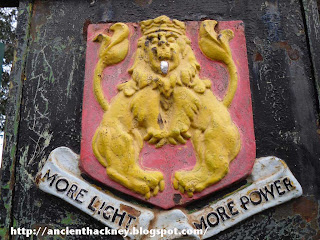 'More light more power' doesn't sound like a governmental slogan but around Shoreditch, Hackney the mantra-like catchphrase is carved in stone, iron and paper. The first time i spotted the slogan was in 2008 on the gate of St Leonard's Church. I really couldn't understand why the church would have this demonic looking one headed, two bodied lion wearing a crown on the gates.  'More light more power' seemed more at home in occult circles than sanctioned buildings in our fair city. 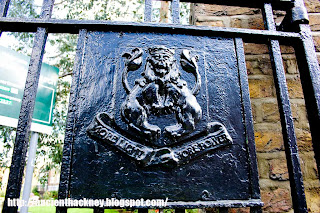 St Leonard's Church Gate 2010
So what the official line i hear the good folks say;

'The progressive policies of the Metropolitan Borough of Shoreditch led to the adoption of the Borough Motto, "More Light, More Power". This commemorates the provision of electric power to the Borough from the Vestry of St Leonard Shoreditch Electric Light Station, later known as the Shoreditch Borough Refuse Destructor and Generating Station. This building in Coronet Street  (now The Circus Space), burned rubbish to provide steam for the electricity generator, and the waste heat was used to heat the public baths. "More Light, More Power" is now the registered trade mark of Shoreditch Town Hall Trust.' 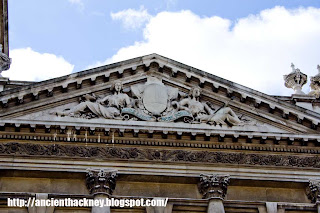 Shoreditch Town Hall
I did  a Google search but if like me you've been using Google as a research tool for years Im sure you've already noticed the change as information is being blocked on a daily basis. I did find this on a website but couldn't validate it… 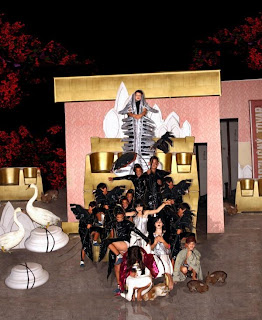 'More Light More Power, the master-stroke campaign slogan that catapulted President Obama into to the White House, gets a new spin here with this London 4-piece, that feels like something of a fusion between the amp-noise aesthetic of Black Rebel Motorcycle Club and the prog-glam theatrics and bombast of Alice Cooper and T.Rex.' I couldn't find any reference to Obama making the exact statement but oddly enough he does mention the words though not in that order in his Nobel Prize acceptance speech. 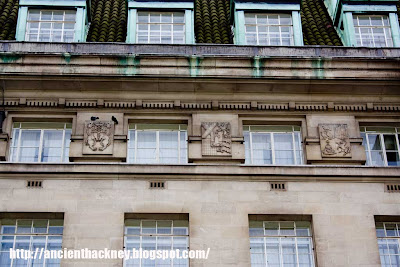 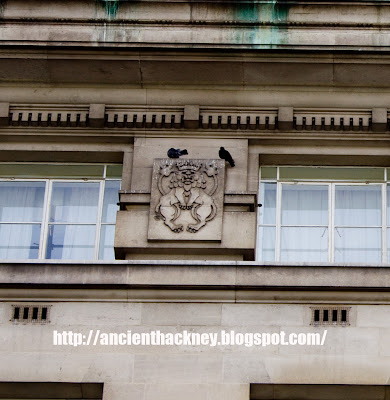 On my current journey i came across the lion symbol on another former government building County Hall (next to the London Eye) except the slogan was missing. It should be noted the buildings that either feature the lion symbol or slogan are placed on ley lines. 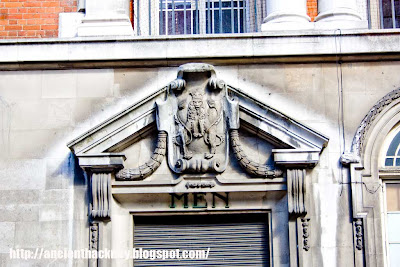 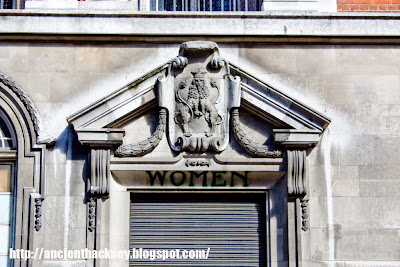 Haggerston, Hackney
If you know the symbol and can shed more light on its history please comment so we can contact you or leave a web link to the information…Thanks
Posted by Truth1013 at 17:27

Hackney's history is as rich and vibrant as that of the Borough of Kensington & Chelsea. Much of that history has been lost amongst years of poverty within the borough which during the 1950s / 1960s / 1970s / 2000s was on record as being the poorest area in the whole of the UK. This in turn caused and causes much suffering within the area which has fed the vortex of which Hackney is placed with self petutating negative energy. This has blinded both locals and international historians to the real history of the borough and why its always remained at the centre of the creative arts since its inception during the thirteenth century.

This blog isn't the soft cuddly we're so cool guide to the public history of Hackney. This borough also lies on some of the most powerful energy grids on the planet which in turn attracted many wizards, magicians, alchemists, Wicca practitioners, black / white witches, paganism, shamans, astro-theologists, anarchists, non-conformists, activists, revolutionists, playwrights, authors, artists, philanthropists, herbalists, healers, and inter-dimensional beings. The area has long been spiritually mapped out with the most important features marked for those that recognise the signs. They met in secret where they performed certain rituals from days gone by until today. The signs are all around you, wake up and take your places, the war on your consciousness has long begun.

We are not experts within any of the fields we discuss on this blog and who in their right minds can claim to be an expert on anything within this domain and by whose measure. We are are nothing more than observers and claim to be anything but experts. This is a human experience which we recognise and embrace in all formats.

This is a place of continued study so if you have something you'd like to add to this project then please COMMENT on posts and get in touch...

Our Mentor is Michael Tsarion and from time to time Michael will help us decode Hackney's Signposts by distributing the images to visionaries in the field from around the globe.